One of the highlights of my birthday adventure back in February, was finding this antique land camera. 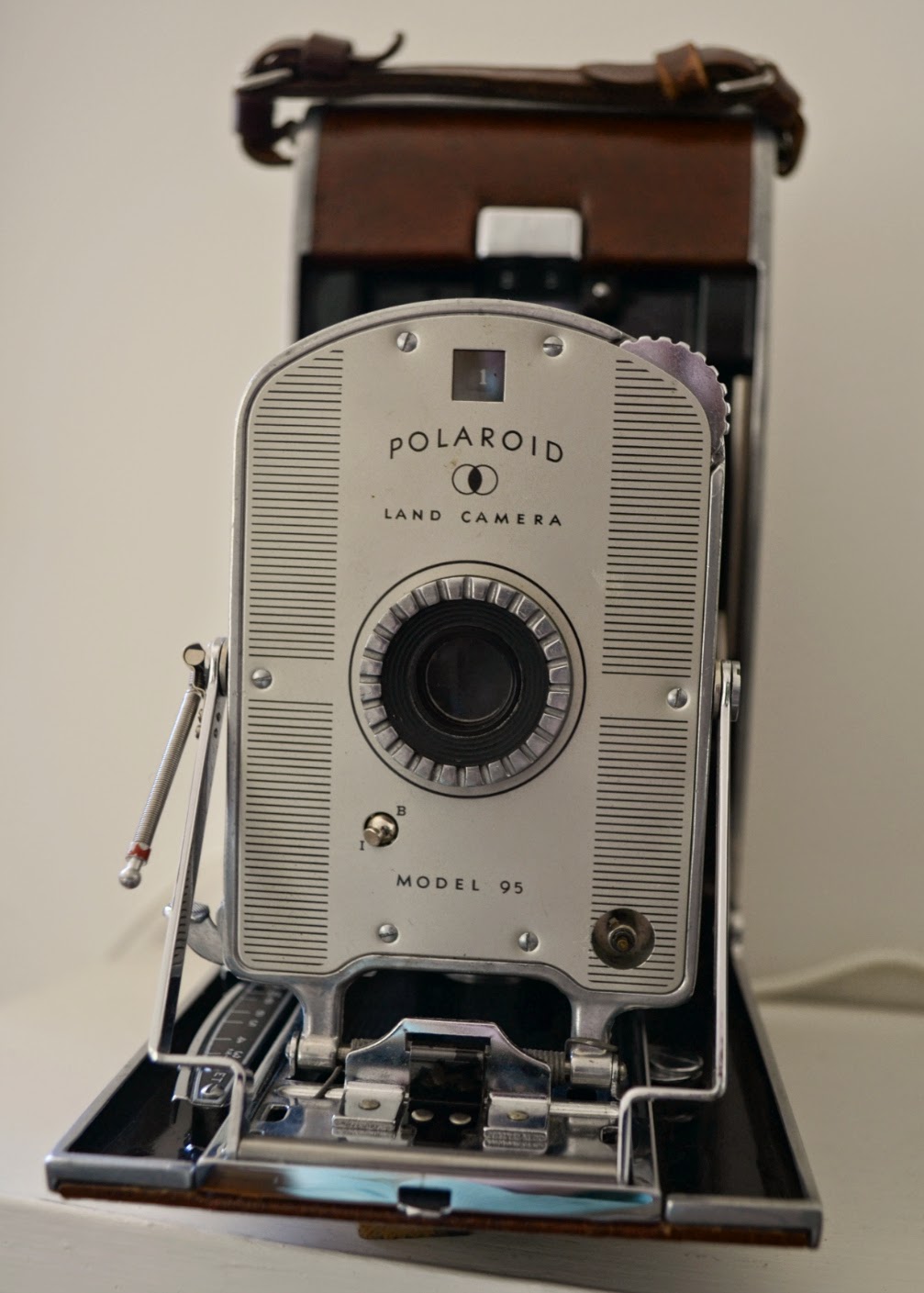 I've had a fascination with polaroid cameras ever since I saw my uncle using one on a beach trip when I was eight years old. I just knew I had to have my own. For my birthday the following year I got an izone camera, and two packs of film. It made tiiiny little photos and I had a blast taking pictures of my pets and my toys. But eventually I used up all the film and for whatever reason never got any more. I never did get a real polaroid camera like I wanted and early this year I discovered the polaroid land camera and knew that was the camera I needed. Not only was it a super neat vintage camera, but you could still take pictures with it! So imagine my surprise when I happen to stumble upon one the next day.

Since finding this particular camera I have learned quite a few things about it that I wanted to share! 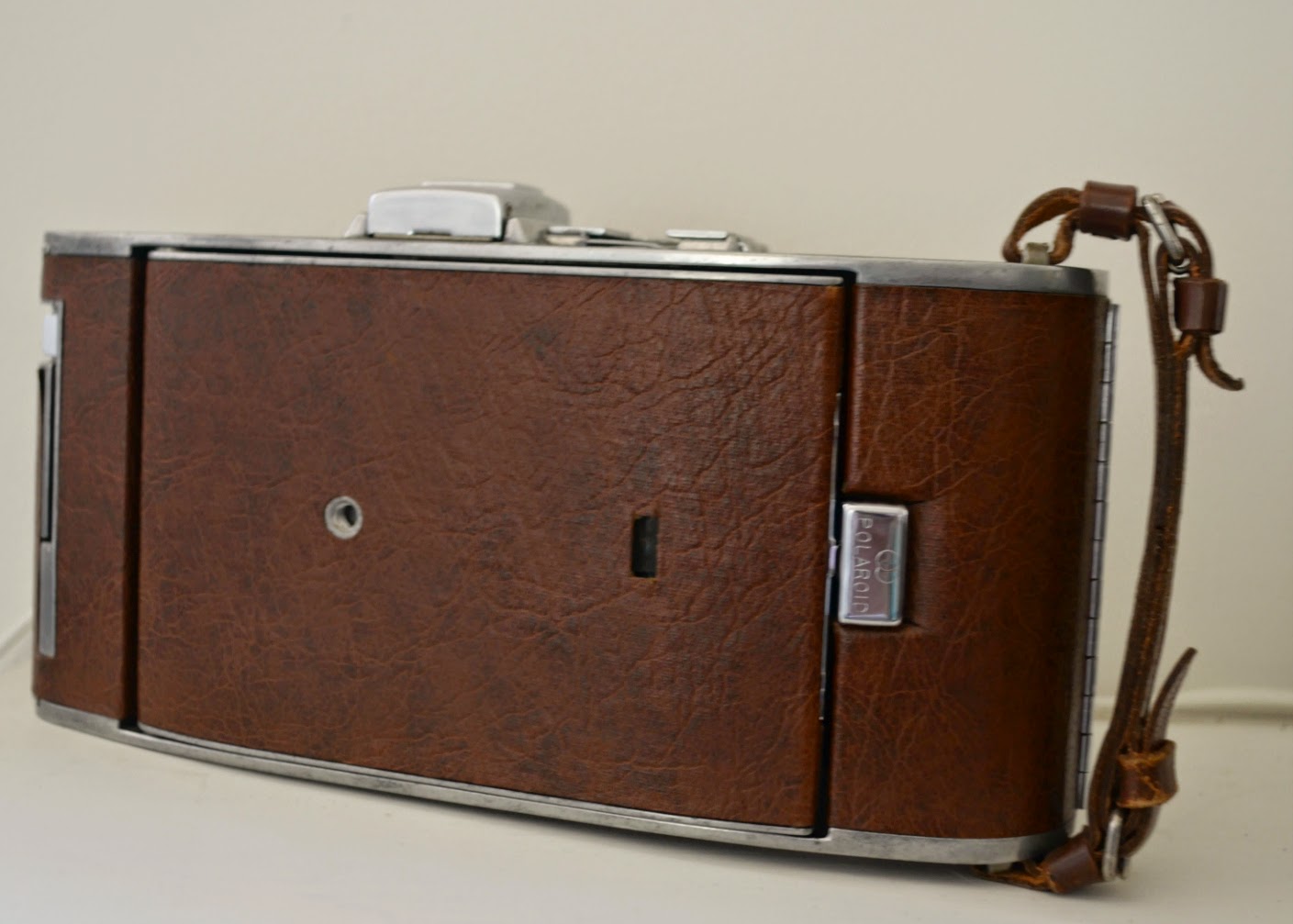 You can collapse the camera and the lens folds up to give you a handy way of carrying it around. This is mainly to protect to lens but it's also convenient  if you don't want people staring at you while you lug around a bulky 70 year old camera. 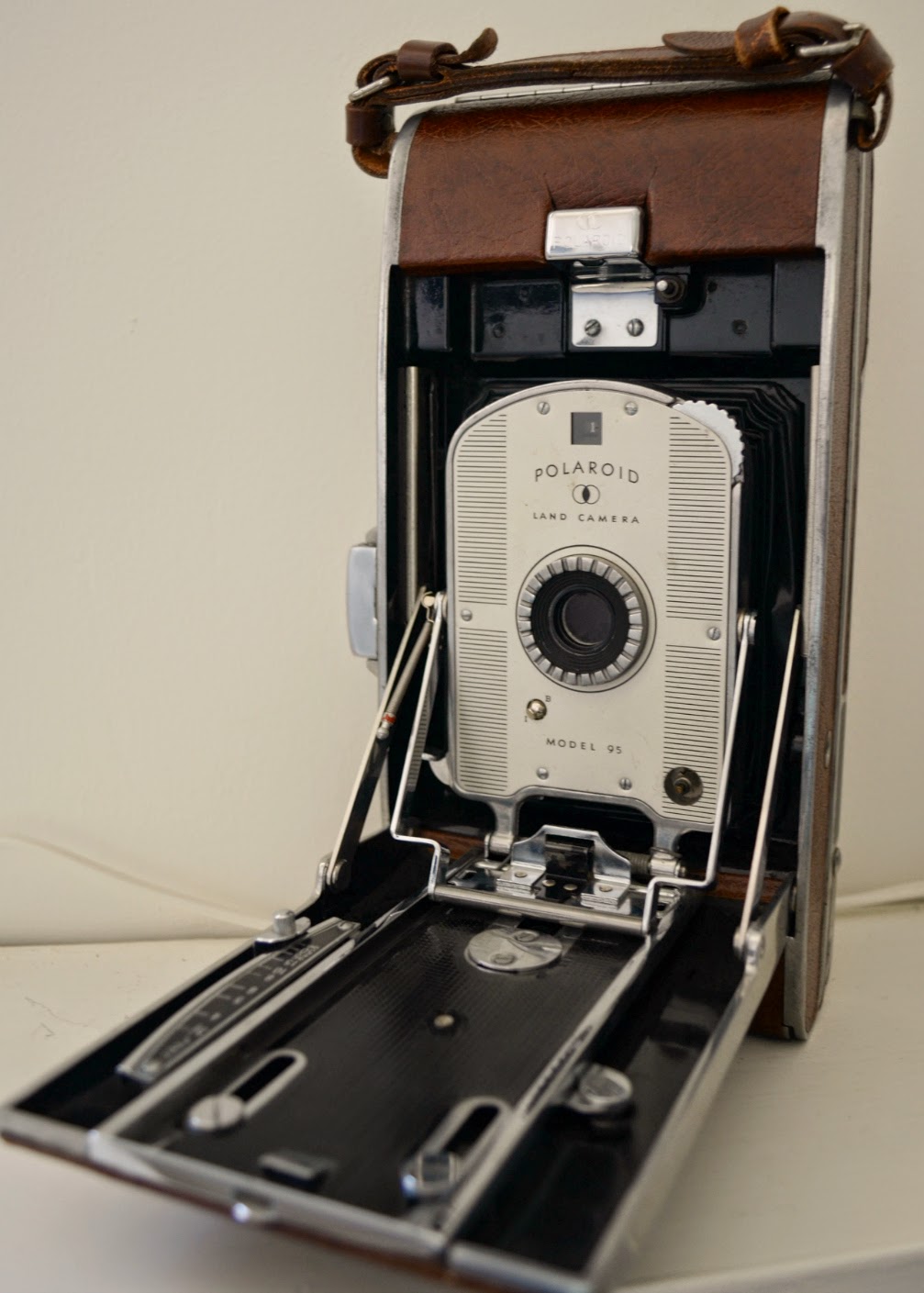 To open it you just press the silver button at the top and drag the lens out until it clicks into place.

Closing it is a bit more difficult though, you have to press down on the metal bars towards the back and then force the lens to slide back in. I'm sure it worked great back in the day when it was new, but it's a struggle to get it back in now. Especially if you're out in public and trying to rush to put away before it prompts someone to come over and ask you a bunch of questions! (Oh the horror!) The inventor of this camera was Edwin Land and it was the first instant film camera ever made.  I read a story that said one day his daughter asked him why she couldn't see the photos he took right away, and that led him to develop this instant camera that was manufactured by polaroid. The polaroid company dropped "Land" from their camera names in 1983 when Edwin Land retired.

The one I happen to find was the first ever model of the land camera which was produced in 1947! Unfortunately these older models take what is called rollfilm, which stopped being produced in 1992. :( However you can still find the film on ebay if you're lucky!  It's a gamble buying expired film though, because you have no idea if it will actually work or not until you try it.  It takes polaroid 200 roll film, and it can also take polaroid 3000 rollfilm but since it's such a fast speed I think I read that you need a special filter for it.. I haven't gotten around to messing with that part yet. To load the film you have to completely unfold the camera 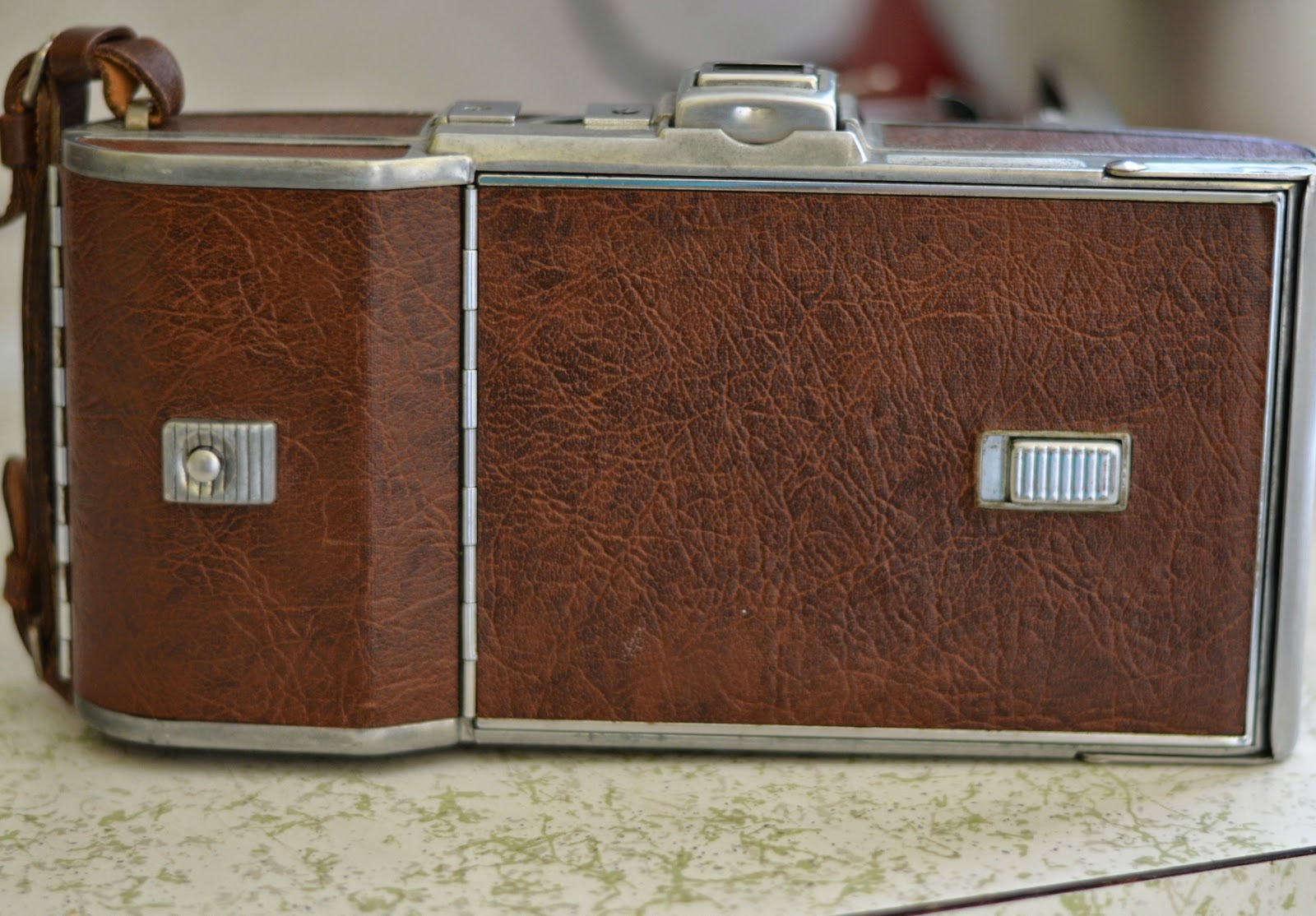 And flipping this switch will open up the rest 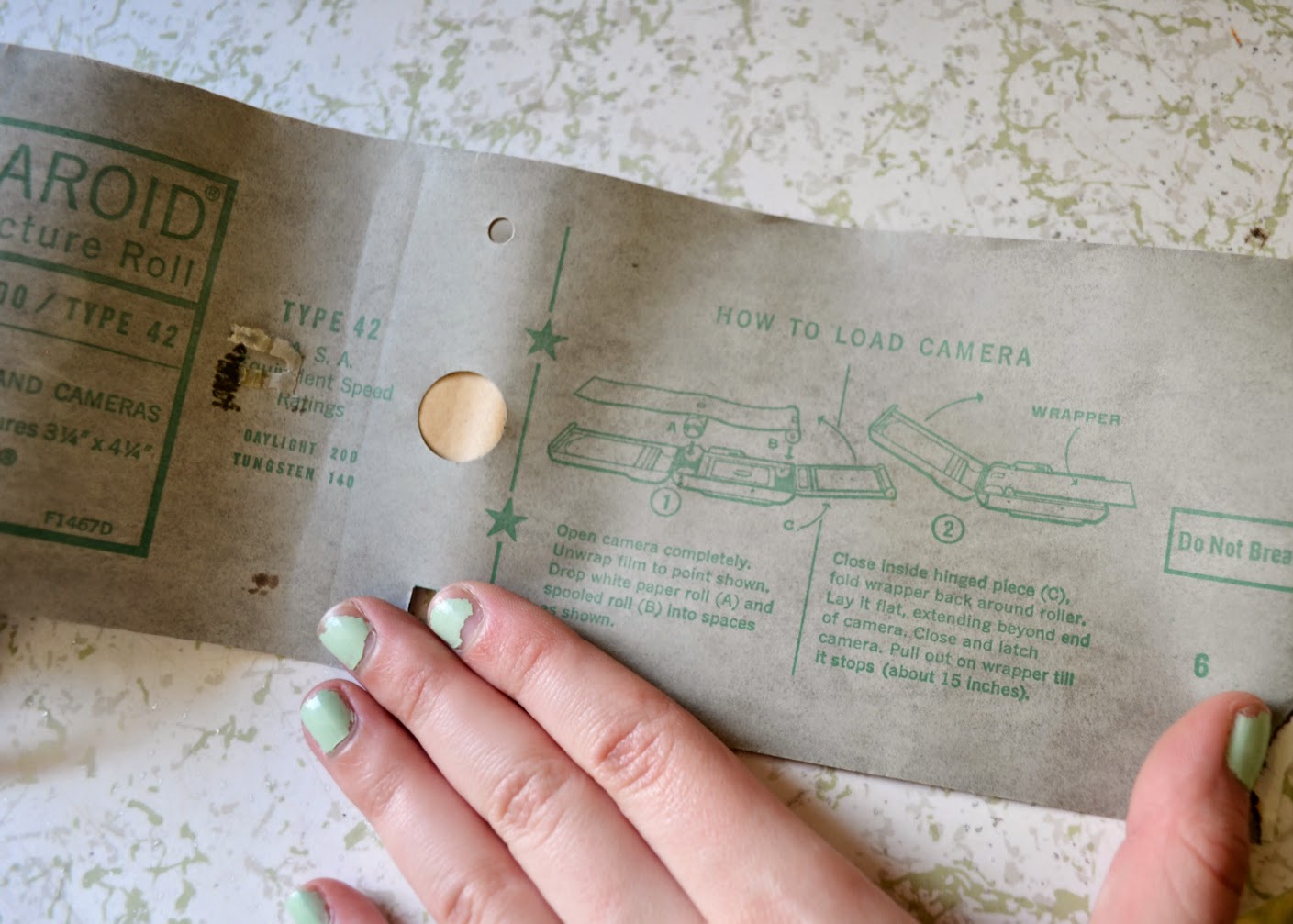 When you open a pack of film you will find two rolls, one is the negative film, one is the the positive film and they are attached together with some ancient scotch tape.  DO NOT BREAK THE SCOTCH TAPE. There are directions on the back that show how to load it; the negative roll goes on the right side,  the positive roll goes on the left side and the wrapper wraps around the first hinged flap and a small portion of it should be hanging out once you completely close the camera.

Gently tug on the wrapper to pull it out. It will be about 15 inches long and then it will stop. This means the first exposure is in front of the lens and you are ready to attempt a photograph! 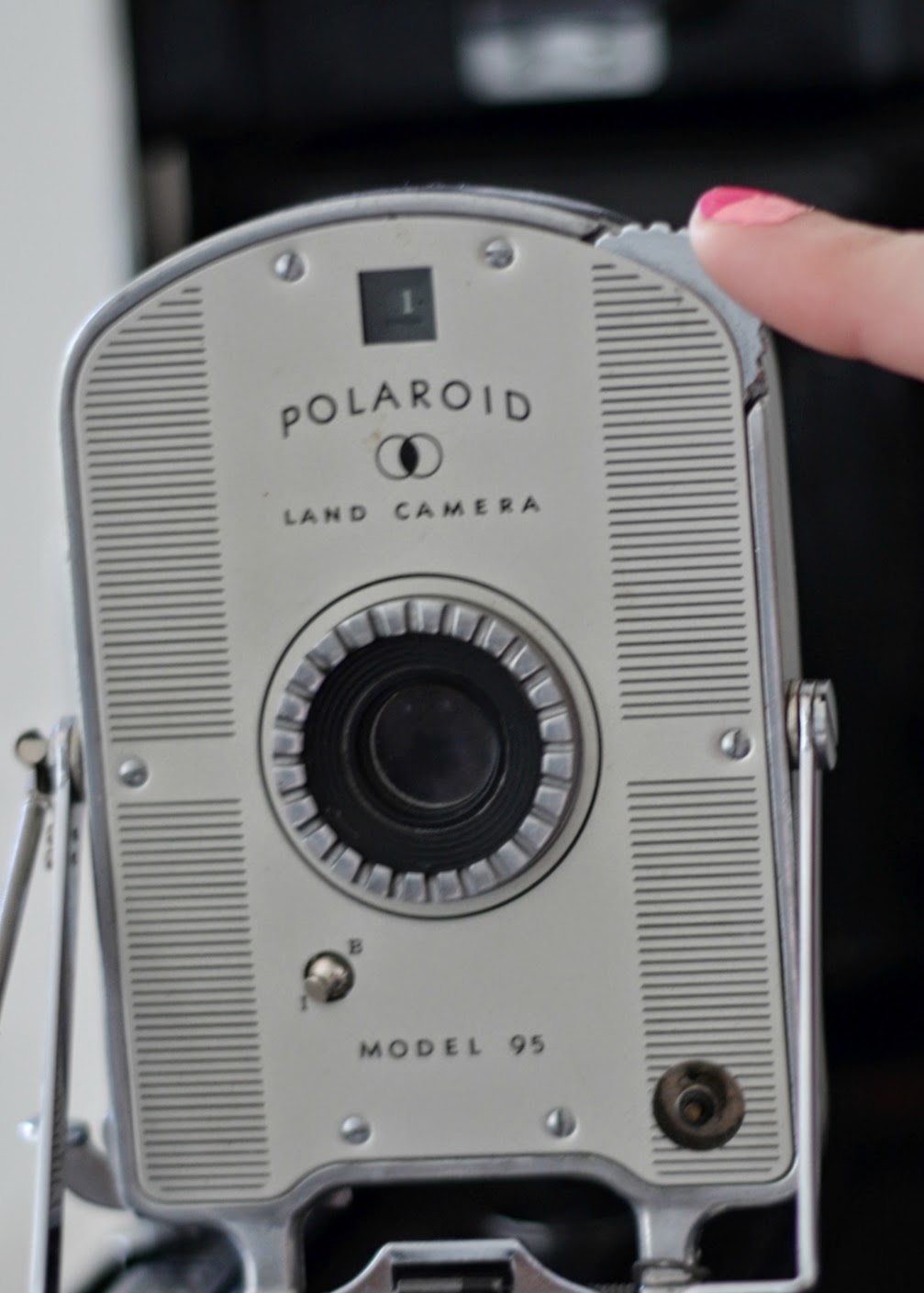 There are a just a few settings you'll need to adjust before taking a photo. The most important is the aperture, which is done by rotating the knob shown above. The numbers range from 1-8; One being the largest aperture and eight being the smallest. The larger the aperture the more light it lets in, so a low aperture setting is good for shooting indoors and a high aperture setting is best for bright sunlight outdoors. As you turn the knob you can see the aperture changing, which is great way to check to make sure you have the setting right. The next setting to adjust is the length of the lens, depending on how far away your subject is. This is easily done by just sliding the lens forward or backward. And then you're ready to take a picture! Just press down on the shutter button and the aperture opens to expose the film.

The image will not start to develop until it is pulled through the rollers which release the chemicals. To do this, you press the film release button which is the little round button on the back of them camera. After you press it, pull the roll of paper until it stops; the photo you just took should now be in the back of the camera and the development process has started. The box of film says to wait about a minute or so, but since the film is super old I usually wait about three to five minutes before opening the back of the camera to get the picture out. Once the time is up you can open up the back of the camera and get your photo. Just grab the little triangle tab and pull it off. 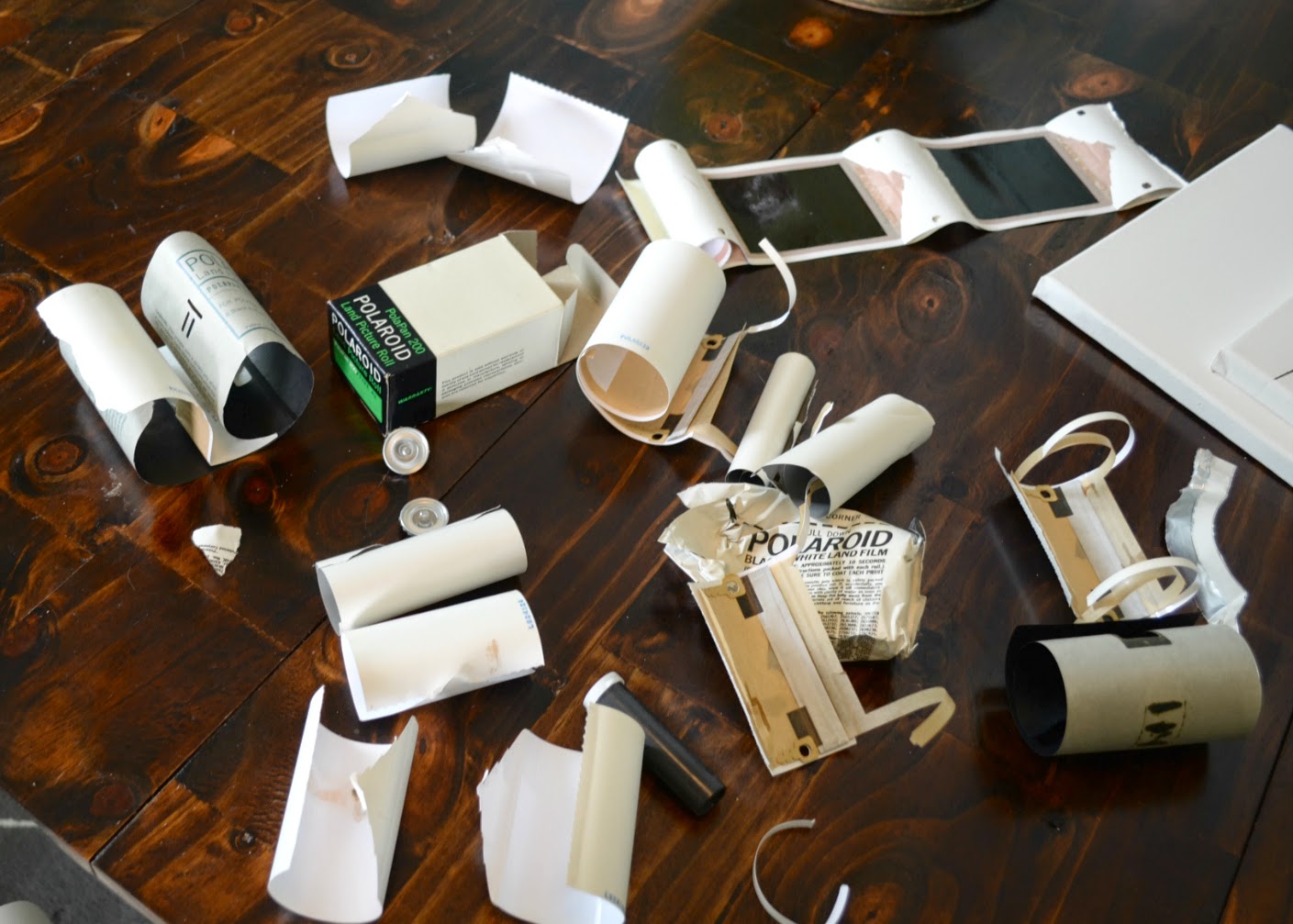 However, using expired film that is over 20 years old is risky and more often than not, will not work out! The picture above shows the remnants of an entire roll of film that did not work out. 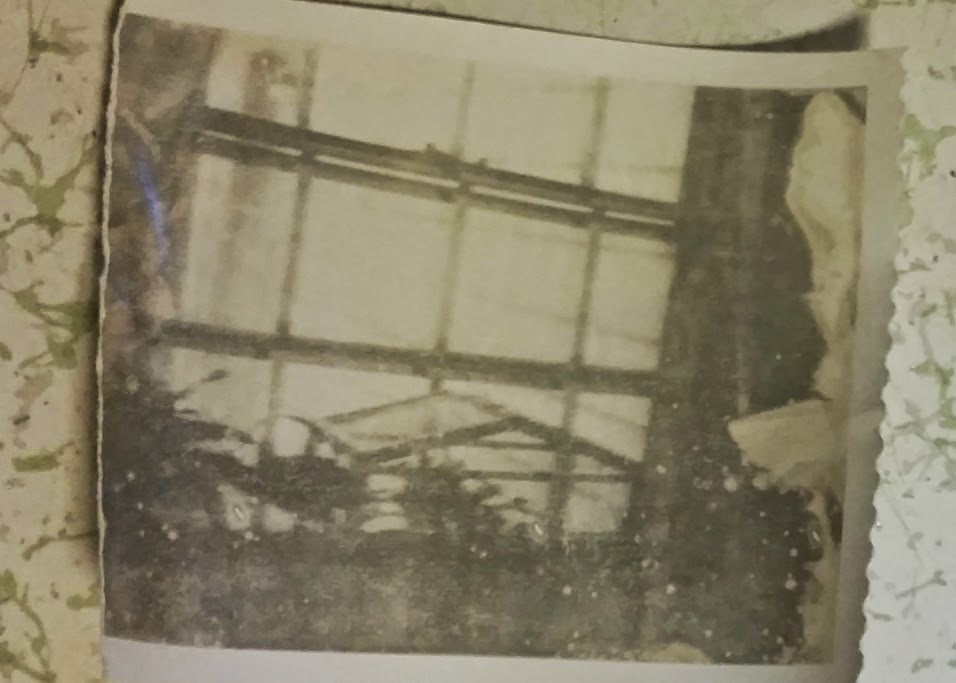 I have actually managed to take one photo! It was the first roll of film I ever tried and it took me a while to realize that the negative roll had broken away from the positive roll (Remember that very important piece of ancient scotch tape I mentioned above?!) Well the tape had ripped apart by itself so I was only pulling the positive roll of film through and my photos weren't developing. Once I realized what the problem was I was able to take this photo, but it just happened to be the very last exposure on the roll. This was a particular bummer because I bet I could have gotten an entire roll of photos if I had realized the problem sooner. -_-

But that's ok, I'm still amazed I was able to even take one! It's of my plants on my windowsill, I was a little annoyed at myself at first that I didn't take a photo of something more interesting, but then I remember that the first photo ever taken was out a window so I thought it seemed kind of fitting. 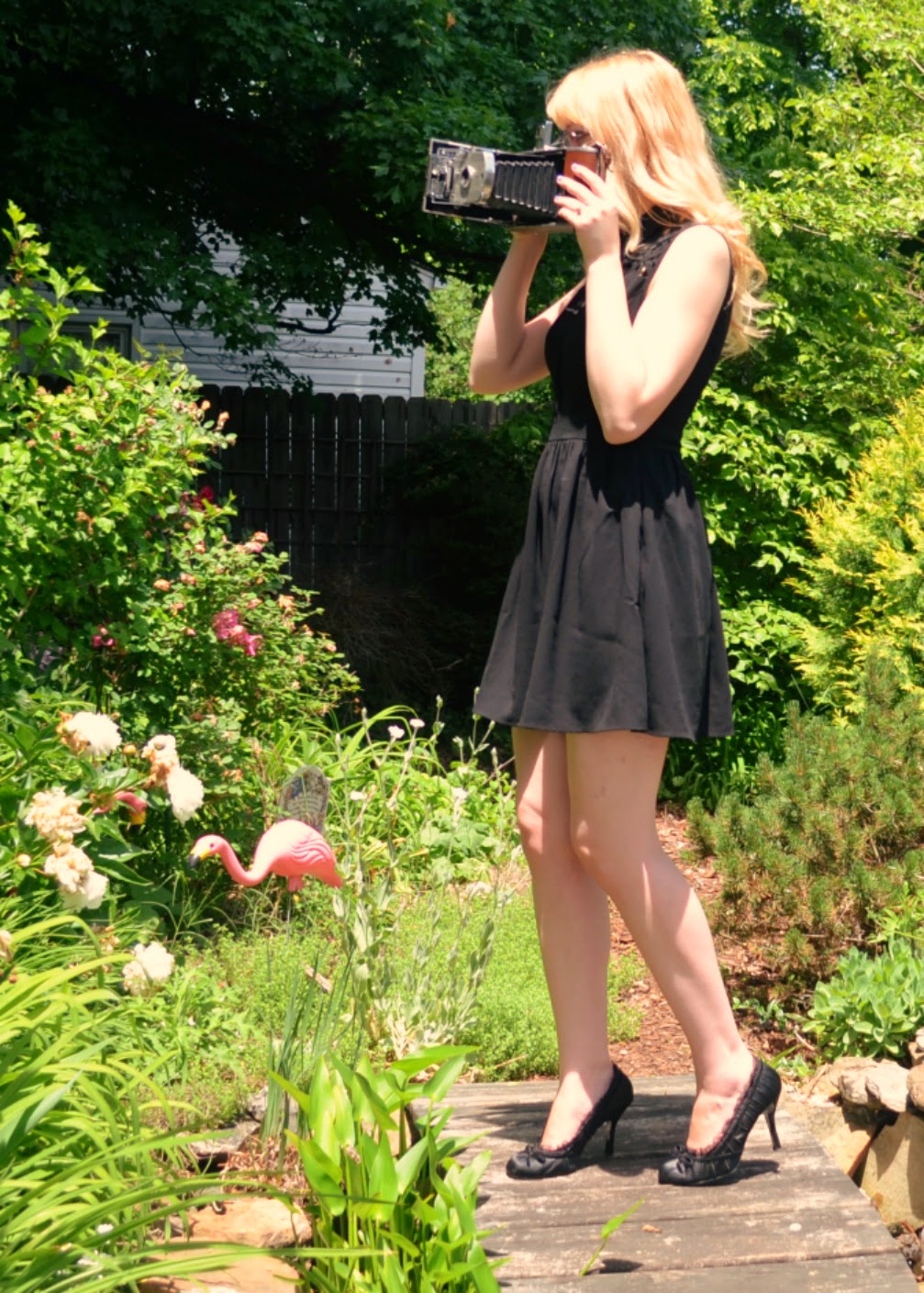 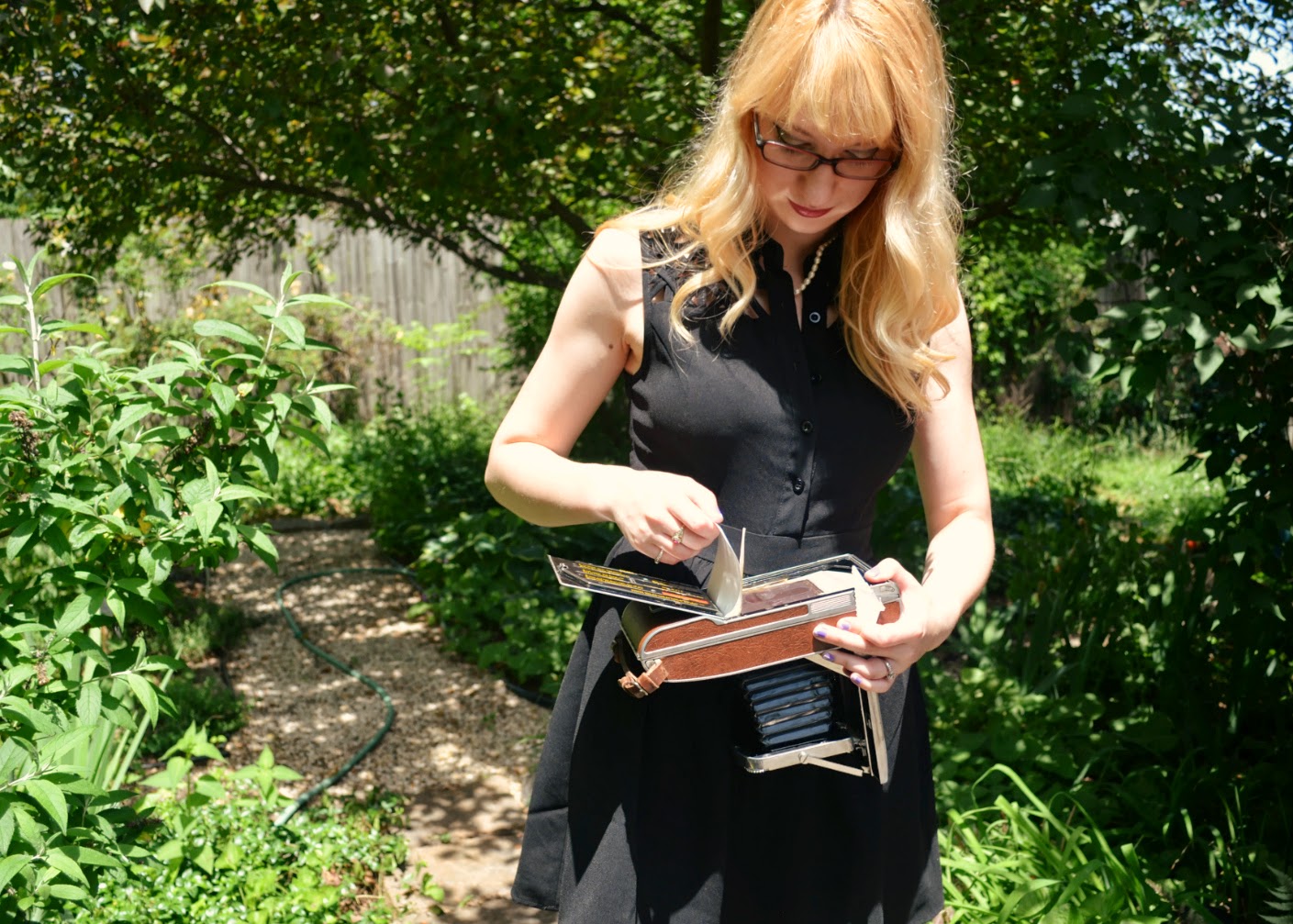 My reaction to a bad exposure covered in old goopy chemicals.

I am determined to take at least one more good photo with this camera!